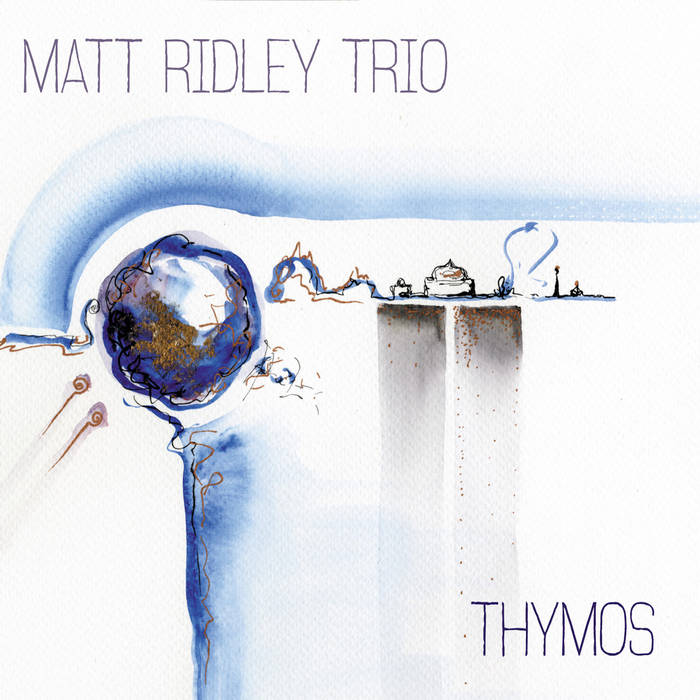 Thymos is the solo debut from double bassist and composer Matt Ridley, a London-based musician who is known as one of the prominent talents of his generation. An album that blurs the line between genres, the origins of Thymos came from Ridley's collaborations with Oud virtuoso Attab Haddad (featured on the album), and Azeri violinist Sabina Rakcheyeva (joint composer of 'Hijaz'), in a band featuring Mercury Award Nominated artist Kit Downes and percussionist Vasilis Sirikis (also featured). His debut features inspired improvisations from the members of the band while retaining an exciting cohesive group-sound throughout.

"I envisaged a sound encompassing the exotic flavors and emotions of Middle Eastern music with the jazz sensibility of improvisation on complex structures," says Ridley on the inspiration behind the original music on the album. By fusing the modal and rhythmic elements of Middle-Eastern music with the harmonic complexities of jazz, Ridley's composition 'Siddhartha' was born, and what followed was a stream of ideas which aligned themselves into the other music on the album, with influences as diverse as funk, contemporary jazz inspired by both the London and NYC scenes, composers Kenny Wheeler and Vijay Iyer, as well as 20th century minimalism.

The core of the album is the Matt Ridley Trio. Comprised of pianist John Turville, the drumming of George Hart and Ridley at the helm, the trio soars through the leaders' compositions with wit and aplomb, no matter if the terrain is tricksy or serene, creating a sound world that positions them as unique addition to London scene. As a bassist Ridley is solid to the core yet light on his fingers across the fretboard as he navigates his own tunes, using them as a vehicle for expression as both a bassist and accomplished soloist.

Special guest saxophonist Jason Yarde perfectly assimilated the feeling of Ridley's compositions, singing the melodies passionately through his horn while turning out some highlight solos on the record. The result is a fine debut from Ridley and one that is unapologetically honest and genuine, fully representing his diverse musical tastes.

"An impressive début and represents a substantial artistic statement from the talented Mr. Ridley... Ridley has emerged as an outstanding composer and band-leader with the release of 'Thymos', his magnificent new album."
★★★★ The Jazz Mann

"A high quality performance, matched by peerless production and presentation and a worthy addition to the collection of any listener wishing to keep abreast of the wealth of new talent that is keeping the music infused with creative drive."
Jazz Views

"Thymos is an ambitious undertaking by bassist Ridley, an album blurring the line between genres, fusing the modal and rhythmic elements of Middle-Eastern music with the harmonic complexities of jazz."
The Jazz Breakfast

"This debut has a great deal to offer as a performance by a tightly-integrated group. It's an album of strong contrasts, and imaginative explorations by Ridley."
Jazz Camera

"An attractive debut release from a leader and composer with real character, and featuring a very skilled bunch of players."
The Jazz Breakfast