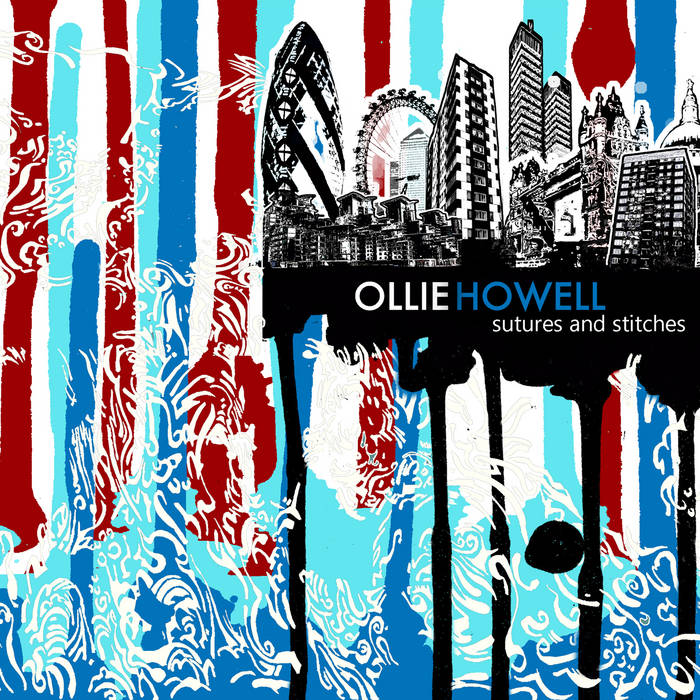 “An unbelievable drummer. So creative I couldn’t believe it. This kid really is a 360-degree beautiful young cat that I believe has what it takes to make a life out of music.”
- Quincy Jones

Sutures and Stitches is the debut solo album from drummer, composer and bandleader Ollie Howell, a young man (mid-twenties at the time of this recording) who has overcome life-threatening obstacles and used these events to compose a program of inspired music. Currently based in London, he's been establishing a name for himself both in the UK and abroad. Ollie’s main focus as a composer and bandleader has been his own quintet who won the Peter Whittingham Development Award, administered by the Musician’s Benevolent Fund.

Howell's debut chronicles a life changing and defining period that had both dramatic highs (including the befriending and mentorship of Quincy Jones and of the legendary drummer Jimmy Cobb) and also dramatic lows. In 2009 Ollie was suddenly diagnosed with a brain malformation which resulted in a series of mandatory neurosurgeries, the last one taking place in April 2012. The scars from Ollie’s surgeries (and their sutures and stitches) stand as reminders, not of his pain and anguish during that time, but of his recovery and determination to heal and forge something positive from the ordeal. Along with a full recovery, one of the big positives from Ollie's experience has resulted in many of the compositions that appear on Sutures and Stitches, as most of the music was written from his hospital bed.

Recorded in London by Derek Nash and mixed and mastered by the New York-based, 5-time Grammy nominee Tyler McDiarmid, the album features a standout sound quality and collection of original compositions that draw inspiration from both the contemporary London and NYC improv scenes, a strong dedication to melodic and memorable themes and driving grooves.

"Mentored and endorsed by Quincy Jones and Kind of Blue sticksman Jimmy Cobb, the London-based drummer/composer Ollie Howell makes his debut with this quintet recording of emotional range and musical maturity. Featuring punctilious percussion and warm, open compositions that never strain to impress, the music has a delicious dynamic flow and an almost elegiac beauty."
★★★★ MOJO Magazine

"It's a fine debut. Clever postbop compositions twisting with sharp improv, and interspersed with brief single-instrument interludes."
The Guardian

"Ollie is just 24 and plays with an intrepid self belief that belies his youth. One to watch."
Jazzwise Magazine

“The album boasts an impeccable sound quality and a fine selection of outstanding compositions with the various modern inspirations from the London & New York jazz scenes. A true devotion to melodic themes that remain in the memory also with rousing grooves and virtuosic solos played by some of the emerging stars of the British jazz scene.”
CD Aktuell

“Howell has had an eventful life with dizzying heights and dramatic lows which in itself is reflected in the eclectic music presented on the album Sutures & Stitches.”
Die Redaktion (DE)

“Howell himself sometimes plays with the approach and polyrhythms inspired by Elvin Jones, and can act with both vigor or restraint.”
Musik an Sich

“The energy of the young musicians is impressive… many inspirational moments.”
Sound and Image

"This is an extraordinarily accomplished debut album from a young British drummer and composer, and his band of fellow youthful high achievers."
The Jazz Breakfast

"A truly remarkable record, not only for the quality of the music but also due to the circumstances that inspired its creation. An incredibly mature début."
★★★★½ The Jazz Mann

"What we have is a stunning, contemporary hard bop set recalling the vigor and drive of one of Art Blakey’s later bands melded with the more introspective probing of Miles Davis’s last acoustic quintet in its `time no changes` phase. The music is characterised by a commitment tomelodic inventiveness and rhythmic vivacity that is both satisfyingly exploratory and ear pleasingly accessible."
Jazz Views

"An absolute gem of an album."
Bebop Spoken Here

"The result is indeed impressive, and it's clear why Howell's playing has been praised by such luminaries as Quincy Jones and Jimmy Cobb."
Jazz Camera

"Ollie Howell composed this bright-eyed set of contemporary jazz originals while undergoing and recuperating from a sequence of neurosurgical procedures – hence the album title Sutures and Stitches. The UK drummer/composer’s main inspiration, though, was the bustle and complexity of metropolitan life, which he adroitly captures with catchy melodies, the rattle and clack of a contemporary rhythm section and sturdy structures to blow on. Lean and lively sax and trumpet solo with purpose and new face Matt Robinson supports sensitively on piano."
The Financial Times