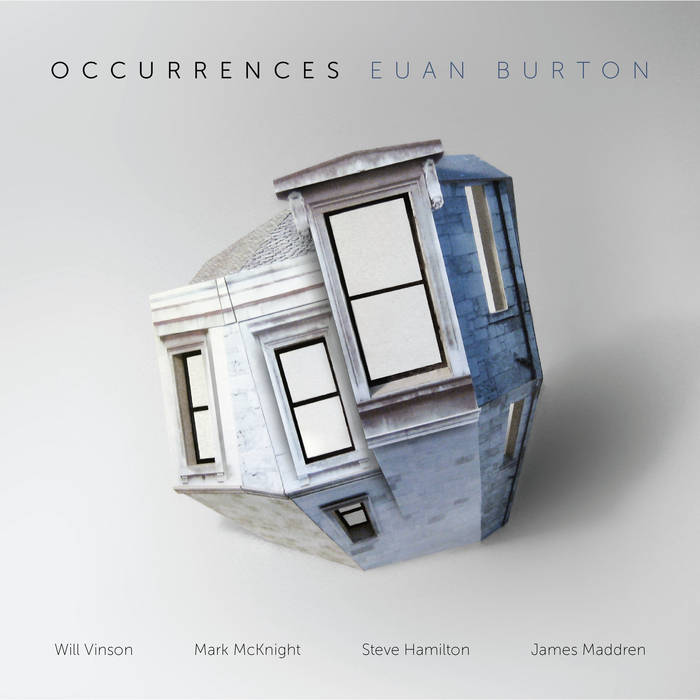 Double bassist, composer, producer, bandleader and promoter Euan Burton has been a lynchpin figure on the Scottish jazz and folk scenes for nearly a decade. As well as being a first call bassist in his native country, Burton has also toured with US musicians such as Ari Hoenig, Walter Smith III and Jonathan Kreisburg. His bass playing features a fluid touch and warm tone, a measured assurance in his improvisations and a solid foundation when in support mode. As a composer, Burton marries the heart and mind equally, providing playful yet tricksy structures on which his band members take great flight. Occurrences is Burton's debut Whirlwind release and his most mature statement to date.

"I wanted to make a cohesive record that felt like a whole rather than a collection of compositions," explains Burton from his Glasgow home. Occurrences finds him at the peak of his creative powers with a recording several years in the making. A suite consisting of seven parts, Burton creates a melodic narrative through the story arc of the album with each member of the group playing key roles as the music unfolds. The group consisting of his long term collaborators-- all with visible international profiles in their own right-- including London born, New York based saxophonist Will Vinson (Gonzallo Rubalcaba, Aaron Parks), Irish guitarist Mark McKnight (Seamus Blake, Sam Yahel), Scottish pianist Steve Hamilton (Gary Burton, Earthworks, Tommy Smith) and James Maddren (Kit Downs Trio, Gwilym Simcock Trio) on drums.

"Occurrences was written as a suite but it can also be thought of as seven pieces. Each piece functions like a chapter helping the story to progress," Burton continues. "That's certainly how I'm feeling this record, but the idea was to create a story in which the listener can relate each part to the whole, and can transfer stories from their own life into the music, but to mean something unique and personal to their own experience. My number one concern throughout the entire process of conceiving this record was that of the listener and how the music comes across to them. Is it connecting? Is this section furthering the story? I was trying to think like a film director or screenwriter in some ways, developing a narrative, pacing it right for the audience and leaving space for the actors to make their roles their own while nudging them in the right direction."

On Occurrences Burton crafts an album that will connect with lovers of song and story in addition to jazz and improv fans; in doing so he steps out as one of the premier bassists/bandleaders of his generation in the UK.

"This is class, beginning to end. The writing is astonishingly mature and imaginative and this young bassist-composer draws a series of outstanding performances from his players."
Jazz UK

'Burton's compositions touch on universal feelings and emotions and his band crafts the music with rare delicacy and grace...[Occurrences] is melodically strong and engaging as it moves through this suite of seven tunes."
All About Jazz

"With its elegant tunes and superb individual and ensemble playing “Occurrences” is well worth seeking out."
★★★★ The Jazz Mann

"The young Scottish bassist Euan Burton shows a lot of flair when it comes to composing both driving contemporary tunes and pretty, lyrical material."
The Ottawa Citizen

"[Occurrences] is a disc to play often - there are so many nuances to absorb once is nowhere near enough."
Bebop Spoken Here

"One of the brightest talents to emerge from Scotland in recent years."
The Daily Telegraph

"The contemporary Scottish jazz scene is rich in talent, but it boasts few more accomplished bassists than Euan Burton… [Occurrences] is a suite that smoothly unfolds its musical narrative across seven different parts… the playing dynamic and handsomely attuned to the cinematic feel of the project.”
Jazzwise Magazine

"The pleasingly melodic music has a refined and subtly crafted feel... and is carefully structured in tempo and mood in its unfolding sequence within the span of the disc...Burton has recruited a very fine band for the project, with New York-based saxophonist Will Vinson and Irish guitarist Mark McKnight both making powerful contributions alongside Steve Hamilton’s excellent work on piano and Fender Rhodes. London-based drummer and rising star James Maddren completes a strong unit."
★★★★ The Scotsman

"The attractively soft-textured but lively Burton meshing with the ever resourceful Maddren provide a platform for a series of absorbing solos from the front line."
London Jazz

"Scottish bassist and composer Euan Burton’s third album as leader is a perfect storm of the right musicians in the right frame of mind having the right compositions put in front of them."
The Irish Times