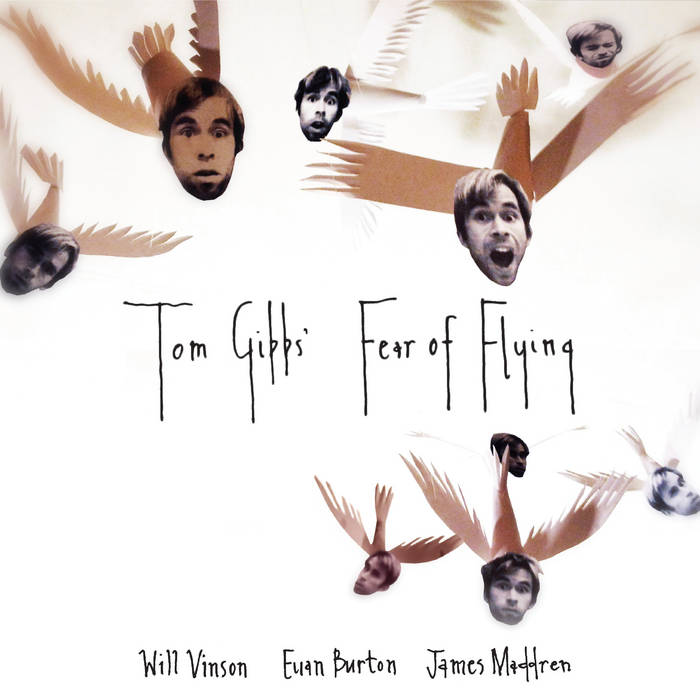 Glasgow based pianist & composer Tom Gibbs certainly knows how to craft a song, and his debut solo release contains melodies, moods, and soundscapes that could make you wonder why you haven't heard of him before. Fear of Flying sparkles with the type of musical character that establishes an artist as a new voice worth noticing, featuring nine tracks of melodic and shape-shifting music.

The compositions on Fear of Flying are distinctive; these are melodies that will stay with you, and they serve to illustrate why mentor (and world renown pianist) John Taylor dubbed him "inspiring." Gibbs' modus operandi is simple: "I usually start off with some chords that attract me, then I'm playing away and singing at the piano until a tune sticks." This 'songs without words' quality permeates the record, and one of the pianist's hallmarks is his ability to maintain a lyrical focus even as the music becomes harmonically and rhythmically complex. Tunes like 'Jumanji' and 'Seventy Eight' are eminently singable, yet difficult for even the schooled musician to perform. Although the sources for these pieces are varied, the resulting body of work makes a satisfying whole. Recent fatherhood is an obvious inspiration, and the title of 'Rebecca Song' and its melody are both derived from his daughter's name. The Blues formed the starting point for 'Farming Stock' when Gibbs tried to play a gut-bucket twelve-bar backwards, eventually sending the song in the direction of a mangled Scottish reel which builds in intensity to its completion.

It's not all conceptualization though, for on this recording you can hear the fun the musicians had in the studio, as they playfully navigate through Gibbs' compositions. Spearheaded by saxophonist Will Vinson (an Englishman arguably better known in his adopted city of New York than on home soil), prodigious drummer James Maddren (who plays in both the Gwilym Simcock and Kit Downes Trio), and double bassist Euan Burton (Tom's oldest ally who hired him for his first-ever paid gig), these musicians lay down some of their best individual performances on a record to date.

Fear of Flying took these friends, old and new, to Castlesound Studios, the finest studio in Scotland, and worth noting only four miles down the road from where Gibbs was born. The result? A notably original debut from the leader; blending the pure bliss of music making with influences from the contemporary Scottish, NYC, and European improvised-music scenes. In reference to Gibbs music, Radio Scotland has said it best: "Go along and be amazed."

"Gibbs is definitely one to watch."
Jazzwise Magazine

"Through the release of his debut solo album 'Fear of Flying' it's fair to say that in 2012 [Gibbs] has arrived in style. A collection of nine unique and inspired compositions...a collection of thoughtful, song-like melodies carefully intertwined with a beautiful approach to sound and texture."
Jazz UK

"The leader’s tunes are a cheerfully melancholic blend of sweet and sour, and the group bring them to life with a lightness of touch and a simmering energy that strikes a fine balance between simplicity and density."
★★★★ The Irish Times

"With Gibb’s Fear of Flying Whirlwind Recordings have added another star to their universe."
CD of the Month (NOV 2012), UK Jazz Radio

"A lovely balance between cool, thoughtful playing and hot urgency while never losing sight of the compositions' essential melodiousness and thoughtfully conceived structures."
The Herald of Scotland

"What really impresses is the commitment, coherence and sheer pep of the quartet as they address Gibbs’s intelligently varied programme."
London Jazz

"As well as the pianist’s fluent improvisations, the disc provides a showcase for his attractive compositions, which balance a bright, approachable lyricism with more intricate harmonic and rhythmic depths, and provide plenty for the musicians to get their teeth into."
★★★★ The Scotsman

"What is distinctive is the sincerity at work...[Fear of Flying] is at the melodic end of the spectrum, although there is plenty of improvising going on."
Marlbank

"The tunes are strong both harmonically and musically, and mix a lyrical quality with the ability to move into a more driving intensity when needed – just see what happens in the second part of Rebecca Song, for example."
The Jazz Breakfast

"Gibbs, an Englishman living in Glasgow, may well have a fear of flying but he has no such qualms when at the keyboard...and give him a lot of cred on Composer Street, these tunes certainly stuck with this listener."
Bebop Spoken Here

"Tom is a very great talent indeed, go along and be amazed."
BBC Radio

"Gibbs emerges as a highly imaginative composer as well as a really thoughtful improviser."
The Herald

"Gibbs, who was mentored by John Taylor at York university, is certainly worth keeping an eye out for at a jazz club near you."
Marlbank