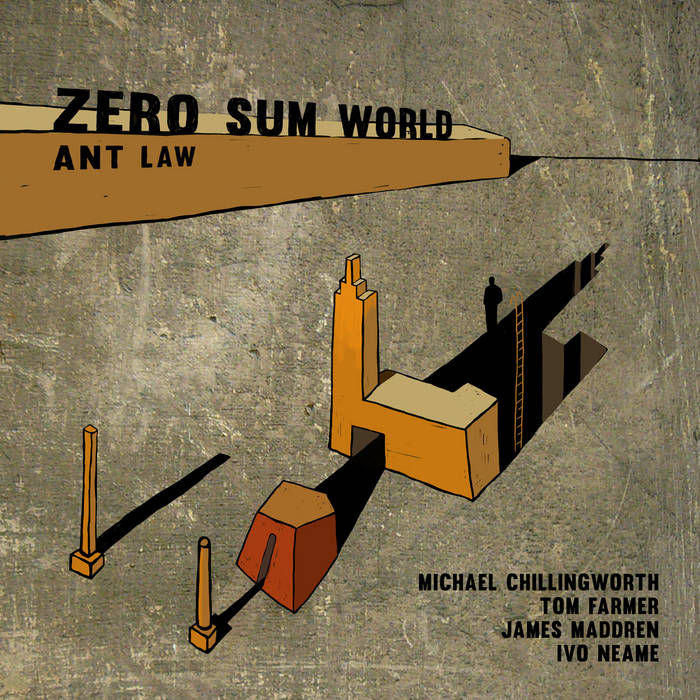 Zero Sum World is the second solo release from guitarist and composer Ant Law and his first for Whirlwind Recordings. A resident in London since 2008, Law regularly performs with Tim Garland, Jason Rebello, Mica Paris, Gwilym Simcock, Leon Ware, Asaf Sirkis, Koby Israelite, Camille O’ Sullivan and is known as a pioneer in the ’Perfect Fourths’ tuning system for guitarists. He is a published author on the subject and his book 3rd Millenium Guitar is currently available from Mel Bay.

The music on his new release was recorded immediately after an extensive 29 date UK tour and a brief sojourn to Brazil where Law finished the writing in two parts. After returning to the UK he received support from the Jazz Services touring scheme and embarked on yet another large tour (this time 27-dates) around the UK and went straight into the studio​ to record​. His band features four guiding lights in British contemporary music: Ivo Neame (piano), James Maddren (drums), Michael Chillingworth (​multiple reeds​) and Tom Farmer (bass). Each musician turns out stellar performances on the record and are given ample room within Law’s compositions to shine.

​
​​Zero Sum World ​showcases an ​eclectic mish-mash of influences from musics around the world, but it's Law’s thematic writing and playing that binds its eleven tracks together into one uniform statement. No doubt the amount of touring the band has done over the last two years comes into play in the overall presentation and tightness of Ant’s often tricky and rhythmically shifting compositions. Both Neame and Chillingworth improvise with aplomb while Maddren’s considered touch flows like water through even the most complicated corners of Law’s tunes.

The title comes from the 'Zero Sum Game' in mathematics (Law himself was a scholar in Physics at Edinburgh University): when the total number of points belonging to the winner added to that of the loser equals zero. As such in a zero sum world no one can profit without someone else's loss. The first track on the album shares this title and is followed by 'Waltz' which explores more joyful territory. 'Mishra Jathi' is a South-Indian rhythm etude given a western feel while two of the pieces 'Leafcutter' and 'Symbiosis 14:21:34' were compositionally derived from multiple rhythms coexisting, as with symbiosis in biology. The longest piece 'Monument' is Law's tribute to the world renown guitarist Ben Monder with whom he has studied. 'Triviophobia' is about taking things too seriously, in particular the arts, and especially music. The album closes out with a contemporary blues and some alternate tuning by Farmer (who turns out some spectacular bass work on the album). Every track features Law's guitar tuned in perfect 4ths which lends itself to unique harmony.

"Law’s compositions strike that hard-to-find balance between tricky and catchy, and the players he has chosen, particularly the rising pianist Ivo Neame, are the sort of musicians who willingly embrace the fuzzy logic of improvisation."
★★★★ The Irish Times

"One of the most original voices of the European jazz scene."
Musikreviews Magazine

"It progressively beguiles as greater depth and detail is revealed."
★★★★ All About Jazz

"With 'Zero Sum World' Law establishes himself as one of the notable guitarists in the field of contemporary improvisation."
Medien Info

"No less than 70 minutes of music with influences from all over the globe... Formidable, highly professional musicians... Thumbs up, up, UP!"
Nachrichten

"A high level of music that showcases wit, skill, flexibility and variety."
Musik an sich

"His unorthodox and unconventional guitar style marks him as a driving force in improvisation-focused music."
JazzZeitung

"Law's music has heart and warmth as well as brainy origins."
The Herald Scotland

"Guitarist Ant Law builds on the approach laid down in his debut album Entanglement, including dipping once again into the complex concepts of physics (which he studied at Edinburgh University) both for his title and some thematic compositional ideas."
★★★★ The Scotsman

"Getting more and more out of this music every time I hear it."
The Jazz Breakfast

"The compositions reveal a depth of meaning with a variety of textures and shifting rhythmical patterns, along with Ant Law’s pioneering use of the ‘Perfect Fourths’ method of tuning for guitarists... A thoroughly enjoyable set and highly recommended."
Jazz Views

​"His music is resourceful and ​embellished with wit, skill, flexibility and variety​, but the main focus is on making music together."
Hörerlebnis

We (and our artists) are continuing on as best we can during this COVID-19 crisis. The live music industry has ground to a halt, but we will continue to release as per our schedule. Your support therefore is greatly appreciated during this time. Thank you.

Shipping is slow at present due to the ongoing pandemic. Customers must provide correct address (please read our shipping policy). ... more