'Views from The Inside' - Album Trailer

Views from The Inside 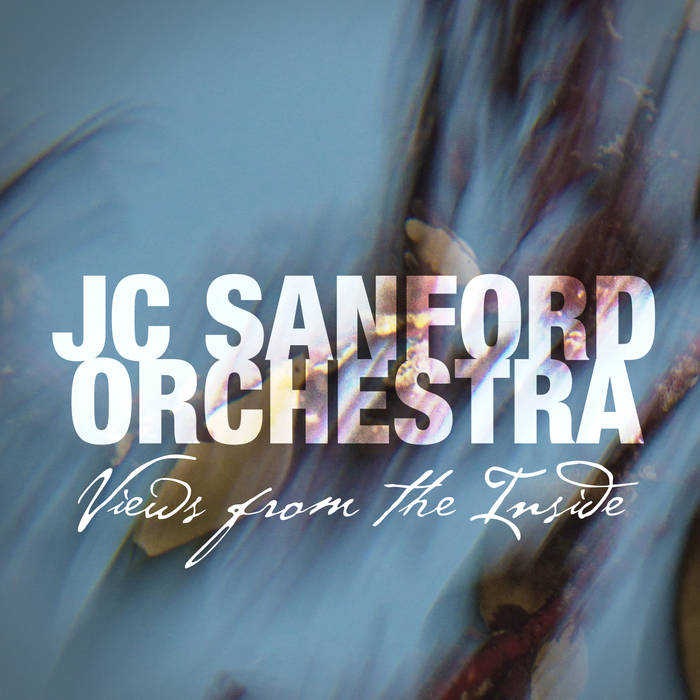 Views from the Inside is the debut album from trombonist, composer & conductor JC Sanford and his 15-piece orchestra. A multiple-award winning composer and two-time Grammy-nominated artist as a member of the John Hollenbeck ensemble, Sanford’s far-reaching compositional palette is rooted in the traditions of the jazz and classical worlds yet pushes both boundaries to create a standout recording of the recent jazz orchestra renaissance, featuring bold sonorities, unexpected colors and arresting sonic textures.

Featured in the JC Sanford Orchestra are many of New York’s marquee creative musicians who together form a unique ensemble made up of non-traditional instrumentation. Neither a big band nor conventional chamber group, the orchestra is a hybrid ensemble that has resulted from Sanford’s experience over the years composing for a variety of instruments in a multitude of contexts, media and genres. Featuring five brass, 4 woodwinds (including double reeds), cello, violin, and an unconventional rhythm section featuring double bass, vibraphone, accordion, and percussion (rather than drum set), the timbres alone have yielded some unique moods with engaging compositional results.

The album showcases an eclectic mix of music written by Sanford over the last ten years, from the epic, through-composed pieces, to the shorter, Brooklyn-inspired ‘vignettes.’ Sanford explains, “I found myself, inspired by my influences of Bob Brookmeyer, [with whom Sanford studied with extensively] Jim McNeely and Maria Schneider, writing mainly longer, extended, multi-sectional works. I decided since I so often like to hear brief works, I should be able to write some that are satisfying and that tell a story, but short stories, rather than epic journeys. I thought the best way to do this would be to programmatically describe places around Brooklyn that had influenced & affected me deeply, more of a snap shot or memory than a diatribe. I feel they behave as a glue, holding the entire album together.”

Throughout the album, myriad textures and colors abound. Programmed electronics fuse seamlessly with shimmering brass lines; epic moments of free improvisation evolve into to rapturous full-orchestra refrains; dense, cluster-harmonies give way to spacious violin and trombone improvisations; quirky odd meters shift into deep swing or flowing conducted rhapsodies. Views from the Inside unleashes Sanford’s wild and infectious imagination resulting in a musical adventure that both invigorates and challenges the listener while assuring that we live in exciting musical times. It's an album stocked with notable melody and inviting performances.

Inspired by such diverse influences as Richard Strauss, Charles Ives, Stevie Wonder and Billy Joel, Sanford makes certain that a sure sense of song and expressive drama is never lost amongst the intriguing tonal colors and surprising harmonic and rhythmic structures. All of this marks Views from the Inside out as a seminal recording, strengthening Sanford’s international reputation as one of the most compelling of contemporary composers.

“When it comes to contemporary big bands, the composer and arranger Darcy James Argue may garner the most coverage these days, but his avant-leaning Secret Society ensemble is far from the only game in town. The trombonist Sanford leads a forward thinking jazz orchestra which draws from the worlds of contemporary rock and new music in its boundary-stretching repertoire. A vibrant new album.”
The New Yorker

"Views From the Inside is truly a magnificent triumph. One hears a variety of melodies, imaginative arrangements, splendid musicianship, forceful and emotional solos, and ideas coming at one, seemingly, from all sides."
Step Tempest (Album of the Year list)

"Sanford draws on a wealth of large-scale influences ranging from swing bands to contemporary classical music, though without creating a patchwork. Somehow his stylistic swerves flow effortlessly into one another, often melding into strange but beautiful hybrids. The ensemble not only brings strong musicianship but eclectic instrumentation, greatly expanding the leader's already imaginative palette."
★★★★ DownBeat Magazine (Album of the Year list)

"Views From The Inside is a study in contrasts and opposing forces. It's a work of compression and expansion, sonic saturation and sparsity, and consonance and dissonance. It's music that's alternately grandiloquent and direct, pointing to a place where high art and simple emotional expression aren't at odds with one another. In short, it's everything that's glorious and right about the state of the large ensemble in jazz."
All About Jazz

"A collection of sophisticated pieces that mix the harmonies and rhythms of modern classical with the gestalt of jazz."
Jazz Weekly

"Throughout this excellent album, Sanford extends his music into areas other than jazz by drawing on modern classical and World music genres, and there are plenty of moments of lyricism and mystery on this wide-ranging collection. It's an encompassing journey filled with multi-scenic variety. "
Textura

"A recording where Sanford’s reach was achieved by his grasp. Highly Recommended."
Wondering Sound

"Adventurous, exciting, mysterious and oddly accessible has Views From The Inside charting a new direction for large ensemble improvisational music. Compelling music with muscle, a cerebral mind-gasm of sound. Easily one of the best releases of this young year."
★★★★★ Critical Jazz

"The emphasis is as much on the orchestrations as the musicianship... Triumphant."
Jazzwise Magazine

"Big Bands do not have to romp through nostalgia... JC Sanford aptly redefines what it means to write for large ensembles with an exquisite album."
Hifi Forum

"A rare record... It starts with the idiosyncratic handling of his instrument, and continues in the unorthodox composition of his 15-member troupe and ends at the shirt-sleeved arrangements that can safely and only be described as outrageous (in a good way)."
Sound & Image

"It's an album with remarkable melodies and enticing performances."
Medien Info

"A total of 12 pieces with alarming diversity; at times spherical, sometimes dramatic and then again slightly lilting passages with a spectrum of moods."
Der Hörspiegel

"With every listen you will be drawn deeper into the musical cosmos of the JC Sanford Orchestra."
Music an sich

"Sanford draws from his overflowing and unbelievable reservoir of knowledge of classical and jazz, and his harmonious puzzle pieces form paintings that describe the lively scene and the inexhaustible energy of a city like New York where he is based."
Jazz Podium

"If you want to raise a new term, then "post-big-band jazz" for JC Sanford's is appropriate, as it goes way beyond the conventional idea of a big band sound."
Musikreviews Magazine

"All of the music here showcases Sanford's richness of ideas and ability to blend a wide scope of method and temperament. Views from the Inside is a work of broad and individual imagination."
The New York City Jazz Record (Large Ensemble Album of the Year list)

"Many young jazz composers today find that the old "big band" format has worn so threadbare that they can do nothing with it. As a result, we occasionally get something new like this – often perplexing, but exciting and quite unignorable. Sanford's orchestra, with its motley assemblage of instruments and electronics, can set your teeth on edge at one moment and draw you into a sweet harmonic wonderland the next. The soloists, notably trumpeter Matt Holman, percussionist Satoshi Takeishi and Sanford himself on trombone, are very impressive, but their excellent playing is much enhanced by the dazzling environment."
★★★★ The Observer

“Views from the Inside presents a dynamic aural tapestry of life in a historic, bustling New York borough as seen through the eyes of an exemplary 21st-century composer.”
Jazziz

“The 15-piece Brooklyn-based ensemble switches musical forms so comfortably and naturally and its unusual instrumentation provides an amazing variety of colours and moods.”
The Northern Echo

“Sanford’s compositions and arrangements cut across all lines. Most Highly Recommended.”
Rotcod Zzaj

“In his [Sanford’s] often sweeping and exciting compositions there are influences of modern arrangers such as Gil Evans and Bob Brookmeyer, traces of European concert music in the early 20th century and always a delicate knocking on the door to the avant-garde.”
Böblinger Bote

"The wind, reed and brass players draw on a plethora of instruments alongside strings, accordion, vibraphone and percussion (and our own Aidan O'Donnell on bass). Sanford makes full use of this expansive range of sound and colour, and his intelligent and creative compositions offer a constantly changing sequence of melody, mood and tempo. A suite of five Brooklyn Vignettes are interspersed through the programme, while the lengthy title track forms an impressive centerpiece."
★★★★ The Scotsman

"The result is a texturally unusual, episodic suite of compositions that nod to pioneers of the form (Bob Brookmeyer, Gil Evans, Kenny Wheeler) as well as the more mainstream sounds of Hollywood film and 1970s cop-show theme tunes. Of the 15, percussionist Satoshi Takeishi, vibraphonist Tom Beckham, and trumpeter Matt Holman are among the standouts."
The Irish Times

"A very impressive debut by JC Sanford. Sanford is equally skilled as an arranger-composer and a trombonist."
Jazz Inside New York Magazine

"The ensemble playing is of the highest quality, Sanford’s writing always interesting and with fellow travellers such as the critically acclaimed Darcy James Argue, the future of the big band – jazz or other – makes for interesting times."
Bebop Spoken Here

"A thought-provoking album that poses as many questions surrounding the way ahead for a progressive jazz ensemble as it answers."
Marlbank

"A well played date for those looking for something expansive and wide ranging."
Midwest Record