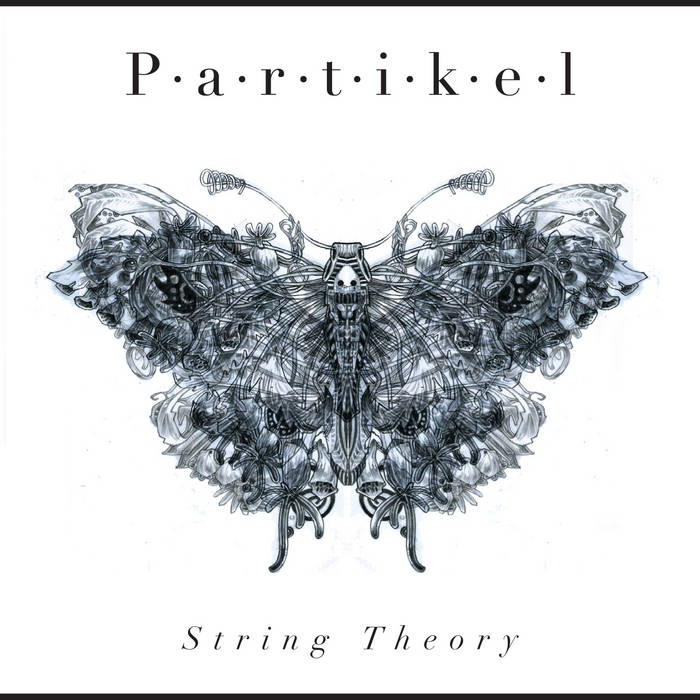 String Theory is the third release from London-based Partikel (Duncan Eagles, Max Luthert and Eric Ford), a group who've maintained a feverish live schedule the past few years and is heralded as a significant new band on the European scene. Their latest album sees them pushing their own sonic and compositional boundaries by teaming up with four respected string players of the UK scene, fusing their love of jazz, rock and world music with the textures of a string quartet to create music that showcases an array of unique soundscapes. The string quartet has been integrated seamlessly into Partikel's trademark style of raw emotion and fiercely interactive improvisations, striking a balance between intensity and rich harmony. It's an excellent example of a band not content with resting on their laurels.

The approach to String Theory differs to Partikel's previous albums where fine-tuning and non-stop rehearsing of arrangements characterized the lead up to the studio recordings. Eagles describes the process: "With this album the charts I wrote for the trio were purposefully more open and melodic than previous material and the arrangements were developed through touring with the band— rather than all the rehearsing— which I think gives the trio performance on this album a much more natural and spontaneous dynamic." An example of this organic process is demonstrated in the second track of the album 'Seeking Shadows' which is a sole product of their live set. "On that track the band would begin playing freely at shows and soon a form seemed to develop, followed by subsequent parts that we liked. Slowly over time a formal structure has appeared that sounds completely composed, but really there was never a chart for that track. Even when we recorded it in the studio there was still an air of the unknown." The band has also started to incorporate electronic effects into their live set which they touch upon in the production of this album, giving String Theory a new overall sonic feel from their previous albums where they solely featured the acoustic trio.

Eagles talks about the string quartet: "When thinking about the addition of the strings I wanted to really try and push myself in all areas and not just in the actual writing of their parts which is something I’d never done until this project. Compositionally I wanted to think on a larger scale, moving away from the head–solo–head format as much as possible and I was adamant that I did not want to use the strings as just backing or padding. I wanted the string quartet to be as involved as possible and have a number of opportunities for the two ensembles to interact and improvise together. The first three tracks on the album play together as one piece and this is where I have really put this concept to work the most. When putting this together I was more concerned with allowing a flowing group effort."

"Facilitated by inventive contrapuntally-rich arrangements, this excellent experiment represents a perfect marriage of two seemingly disparate entities, resulting in an album of richly mellifluous sonority."
★★★★★ All About Jazz

"This is listenable and inventive jazz from a band refusing to rest on their laurels."
London Jazz

"As a trio, Partikel have clearly become stronger, unafraid to venture into the unknown, and looking to develop their musical journey with both spontaneity and bravura."
AP Reviews

"Definitely the best Partikel album to date, and an enjoyable listen, more to the point containing plenty of depth, sinewy improvising, and good ideas."
★★★★ Marlbank

"This is a thoughtful and varied disc which will add to the band's growing reputation."
The Scotsman

"The music is absorbing, complex yet sure-footed and full of joy... Powerful from the start."
Hi-Fi News & Record Review

“Rather than merely embellish the jazz component, here the strings are active participants and in any case the traditional jazz rhythm section has been dispensed with altogether which opens up the sound to a whole new range of influences.”
★★★★ UK Vibe

“One of the most successful attempts at fully integrating a string quartet into a jazz ensemble.”
★★★★★ Jazz Journal

​"One of the contenders for jazz album of the year... Interesting and unique."
Music an sich

"A step change for Partikel, String Theory is an intriguing insight into the depths of their resources."
The Guardian

"Another intriguing step in the evolution of this talented outfit."
★★★★ BBC Music Magazine

"String Theory manages to be both accessible and innovative at the same time."
Sandy Brown Jazz

"The group have taken a giant leap forward with their latest offering String Theory."
★★★★ The Jazz Mann

​"One of the most exciting new formations in improvised music."​
Medien Info

​"Partikel offer an excellent mix of virtuosity and playfulness​."
Nachrichten

"Imaginative, original and at times deeply poignant, this is a big step forward by a group intent on walking down a road less traveled."
★★★★ Echoes Magazine (Album of the Month)

"String Theory is a fine record from an extended English trio that will make people want to hear them live... Fine soprano saxophone play and langourous strings."
Salt Peanuts

"Possesses the rare gift of incorporating strings into the improvisation process. The crossover of free, rock and classical strengthens Partikel's reputation as one of the most exciting trios in improvised music."
Jazz Podium

"Consistently proves colourful and entertaining... There is some high quality music making to be heard in this beautifully recorded album."
Music Web