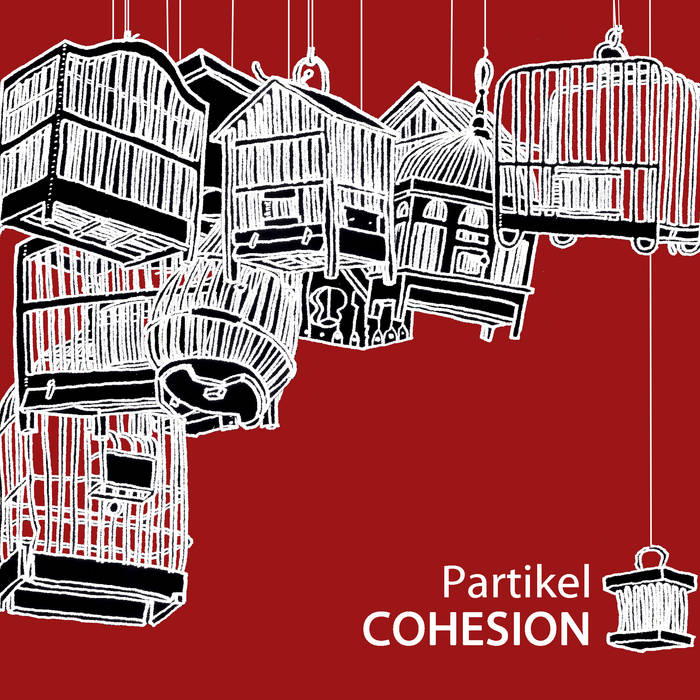 Since releasing their eponymous debut album in 2010, London, UK based contemporary jazz trio Partikel have established themselves as a notable addition to the European music scene, known for their high-energy live performances and striking originality. Having spent 18 months performing new music across Europe while holding regular rehearsals, the band has gone into the studio and the result of this intense period of music making is now documented on Cohesion, their latest release for Whirlwind Recordings. According to tenor saxophonist Duncan Eagles, “Most of the new songs that made it onto this album we have been playing in for a long time, developing it on the bandstand and rehearsal room, but the way we were playing this music a year ago is a world apart from how you will hear it on our new record."

The sound palette heard on Cohesion spans the musical spectrum. “The three of us are always checking out what each other are listening to, as well as going out together to hear all kinds of different live music,” states Eagles. There are influences from North African and Latin American culture as well as Western sounds inspired by jazz, funk and classical music, all held together with indelible melodies and a vibrant band energy.

Partikel have been hosting a successful invite-only jam session for a few years at one of London's premier new venues, The Hideaway in Streatham. As bassist Max Luthert rightly states, "We have been hanging out and playing together so much over the past 18 months this is really starting to develop a strong and cohesive band sound." Indeed, rarely do bands get the opportunity to work together as much as Partikel has these past few years, and the result is clearly evident on Cohesion. The declaration amongst many in the UK music press of late is that Partikel is one of the hottest new prospects on the live scene. With the release of Cohesion, the band earns this praise.

"Cohesion packs a mighty punch and is the sound of a new kind of power trio in full throated song.”
Bass Guitar Magazine

"With not a harmony instrument in sight, saxophonist Duncan Eagles with bassist Max Luthert and drummer Eric Ford impressed on the woozy 'Conquistador',... Think of the sound of JD Allen on I Am I Am played through the filter of an English sense of melancholia, and you’ll get the measure of the fast-maturing Partikel."
Downbeat Magazine

"[Cohesion is] a masterclass in the art of the trio, with music that is eloquent and articulate."
Jazz UK

"With a great sound and an excellent melodic sense, Partikel delivers songs that really are cohesive."
★★★★ Jazz PT Magazine (Portugal)

"Consistently strong melodic themes give the trio plenty to get their teeth into but without losing the interest or patience of the listener. North African, Latin and Caribbean elements all add to an impressively varied sound palette. I’ve no doubt that the coming live shows will win them many more friends."
The Jazz Mann

"This was engagingly crafted, lucid music: coolly linear, the airy yet swinging three-way melodies were cleanly structured yet open to many an energizing shift in accent and attack... Check out Cohesion."
Jazz Journal

"'Cohesion' is an album that skillfully varies between slow and fast, and between complex and simple song structures... Each a master of his instrument placing themselves at the service of the common goal of playing high-quality music."
Mos Eisley Music, (Germany)

"There is a straight line back to Rollins’ classic sax trio in the 50s... Partikel uses it as an impetus for a dynamic and forward-looking proposal for what a sax trio may sound like today... This trio is incredibly tight in their expression."
Jazz NYT, Danish Jazz Blog

"Partikel is a young contemporary jazz three piece with a taste for African, Caribbean-rooted and contemporary grooves, folksy melodies, and exhilarating changes of gear... There's not a dull moment."
Jazzwise Magazine

"Bolstered by an excellent mix from Tyler McDiarmid, the trio packs a hefty punch over a dozen relatively short pieces that are freighted with sufficient changes and dynamics to satisfy those in search of compositional richness, yet retain a dance-like sensibility to suggest that the players have imbibed some of the trance-like riffing prevalent in folk music, be it Caribbean or North African."
BBC Music

"Partikel is an emerging force on the UK scene... A strong ensemble with a powerful set of tunes."
All About Jazz

"The trio’s flexible, responsive interplay – well-honed in regular gigging – maintains both energy and interest."
The List

"The three main characters are musicians of great stature, all capable - and this is crucial for the success of a work of this kind - to constantly change times, forms of expression, composition of sentences during group interplay."
All About Jazz Italia

"Partikel's second album is stronger and more assured than 2010's eponymous debut... Saxophonist Duncan Eagles holds the stage with his attractively dry tone, sharpness and the urgent ferocity of his tenor improvising. The close-knit nature of the trio shows in how they handle tight, hooky melodies, and in the flexibility of Max Luthert's bass and Eric Ford's often loose, impressionistic drumming."
The Guardian

"London based saxophone trio Partikel have spent much of the past 18 months touring together, and, judging by 'Cohesion' the effort has paid off."
The Metro