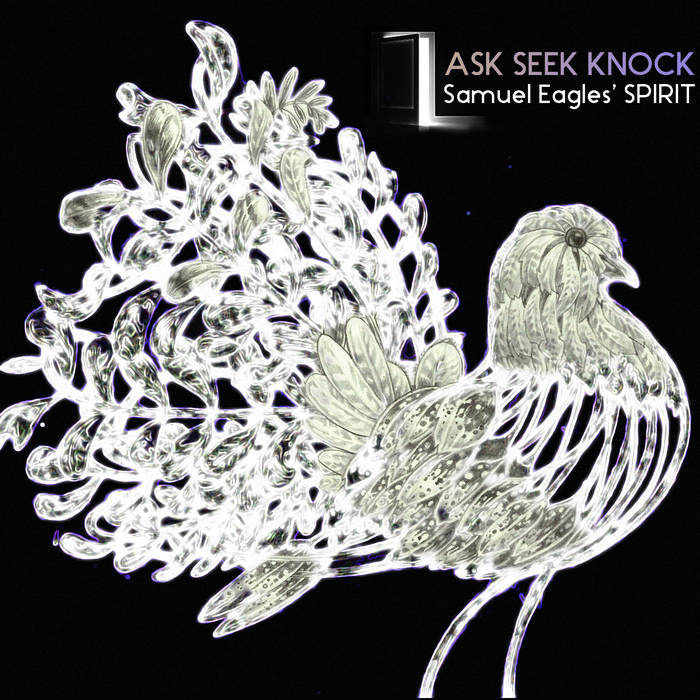 Increasingly incandescent across the London jazz, funk and world music scenes, alto saxophonist and composer Samuel Eagles announces his debut Whirlwind release Ask Seek Knock with his band, SPIRIT (saxophonist Duncan Eagles, pianist Sam Leak, vibraphonist Ralph Wyld, double bassist Max Luthert and drummer Dave Hamblett), breathing life into eight, expansive, original compositions. Eagles’ solo debut of 2014, Next Beginning, plus subsequent appearances on studio recordings with other artists, provided the swift impetus to a professional career which had its roots set at the Royal Academy of Music and then nurtured at Trinity College of Music. The saxophonist was mentored and educated by musical luminaries Mornington Lockett and Jean Toussaint, so it’s entirely appropriate that Toussaint augments the personnel here by guesting on two numbers with customary flair.

Creative efflorescence can be triggered by significant, often emotional life events – an oblique, unexpected source which mines one’s innermost feelings and channels them via another route with unclouded clarity. Samuel Eagles’ inspiration for this body of work arose from a period of what he describes as his own “spiritual enlightenment” following a turbulent few months (not unfamiliar throughout compositional history). As he explains: “I’d had some tough things to go through, which had the effect of pushing me deeper – both devotionally and artistically. I eventually came through it all with a sense of purpose and positivity which revealed the musical direction for this album”.

Pairing alto and tenor saxes upfront, as well as overlaying the differing timbres of piano and vibes, affirms the richness of Eagles’ writing. His ear for textural combinations and strong, melodious riffs can be heard in the steadfast buoyancy of ‘Eternity Within My Soul’, which teems with improvisational character, and in the searching serenity of ‘Changed, Changing Still’, enhanced by Ralph Wyld’s sustained vibes and the lucid double bass expression of Max Luthert. Beauty, light and courage are symbolized in resolute ‘Dreams and Visions of The Son’, including a lush, prismatic tenor spotlight from Jean Toussaint (“It’s amazing to have Jean playing on the album, as he’s been so supportive in developing my own identity”), and ‘Hear His Voice’ sparks lively, modal conversation between Toussaint and Samuel Eagles, bolstered by the robust rhythms of Luthert and Dave Hamblett.

The two Eagles brothers share the sax lead to blithe, soulful ‘The Twelve’, featuring typically eloquent high piano invention from Sam Leak, while wispy though assertive ‘SPIRIT’ opens the door for Samuel’s imaginative alto extemporizations. Pastoral ‘Hope In The Hills’ was prompted by a true story of benevolence involving a tour bus breakdown in Italy, where an uphill country-lane push led to campsite owners who provided log cabin accommodation, food and van repairs (“We were stranded for four days in the most perfect place possible”). And the funky sax-duo groove of title track ‘Ask, Seek, Knock’, with effective bubbling piano figure, asserts a belief in seeking faith and wisdom; the concept of one door shutting and other doors of opportunity opening.

Recalling the album’s formation, Samuel Eagles says: “Creating it has been a fantastic move forward. For me, when music connects, it builds a great feeling of intensity in my inner self. My hope is that listeners will sense something of a transcendental experience with this album”.

"Richly textured and contrapuntal arrangements enhanced by the imaginative choice of instrumentation."
★★★★ All About Jazz​

"The saxes vie with one another in fluid joint solos... adding to the richness of the harmony."
Jazzwise Magazine

"A collection of pieces that are richly inventive in terms of colour, texture, harmony and rhythm. But alongside the complexity there is also a strong melodic sense... All of the album personnel play superbly and engineer Tyler McDiarmid’s mix (working in conjunction with producer Eagles) captures every nuance and subtlety of the music with pinpoint precision."
★★★★ The Jazz Mann

“The inclusion of a vibraphone in the sextet brings an interesting dimension to the music.”
Sandy Brown Jazz

"An exciting band... ​Mingus overtones... Tension building moments... The rhythm section is merely one to die for."
Bebop Spoken Here

"Innovative and original with perfect cohesion between its varying tempos and rhythmic delicacy.”
Radio REC

"A potent combination of fluid lyricism and free melodic motion."
Bird is the Worm

“Soulful and very creative pieces... The young composer Eagles shows a great maturity in his compositions.”
Musik an sich

"Luthert and Hamblett provide a sound rhythmic base from which the alto and tenor saxophones can cut loose."
Rhein Main Magazine

“A varied and original recording... Check it out."
HiFi Forum

“A complex and fresh sound full of youthful vigour combined with an internalised feeling for the music”.
Sound & Image

“The exuberant imaginings of the young line-up create something new and refreshing.”
Jazz Now Magazine

“The musicians display joyous mood, inventiveness and spontaneity, inspired by the excellent compositions and the thoughtful arrangements of Samuel Eagles.”
MusikZirkus Magazine

"A pretty impressive debut... Lets hope that this ensemble produces more in the future."
Der Hörspiegel

"An impressive display of 'off the beaten track' jazz played from within."
Musikreviews Magazine

"Creative, open and polished."
In Music